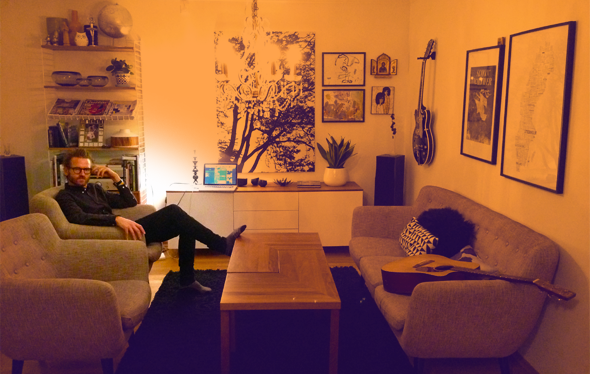 October 21, 2014 // JONO recently visited Simon Walther in Norway, and had an exclusive album pre-listening to enjoy. The new songs are all recorded (except for vocals on one track), soon ready for mix and mastering. This is a quick overview.

We are eating leftovers from yesterday’s surprise-party. Simon starts his computer and let me listen to all the songs for his next, yet untitled, album…

I’m struck by the new sound. Very different, but very interesting. In a very good way! Songs like “Syria”, “Bølger og vind”, and “Byen brenner” catch my attention at once, and are all hard to forget. Different songs, but all fits together somehow.

Another difference from the previous album “Leave The Sinking Ship Behind” is that Simon is singing in Norwegian, and it fits him well. He sounds more comfortable and are able to express himself even more.

Simon plays banjo on all songs, and reunites with his long-time friend and brother in arms; Anders Eckeborn, who play guitar, bass, violin, and zither. This phenomenal team really creates pure magic! The way they use the instruments is truly inspiring, and I can only imagine that they must have had a lot of fun in the studio. The fact that Simon has no deadline haunting him, could also be a contributor to the playfulness in the sound.

Compared to the previous album, the sound on this one is tighter, lighter, but sometimes very aggressive and emotional. More synthesizers and fuzz.

About the difference between the albums:
“Organ and piano are replaced with synthesizers, the lyrics is not in English anymore, but in Norwegian, the sound has switched a bit from rock to pop, and the melodies are simpler.” explains Simon.

The album will be released during 2015. No date set yet, but it will surely be worth the wait!