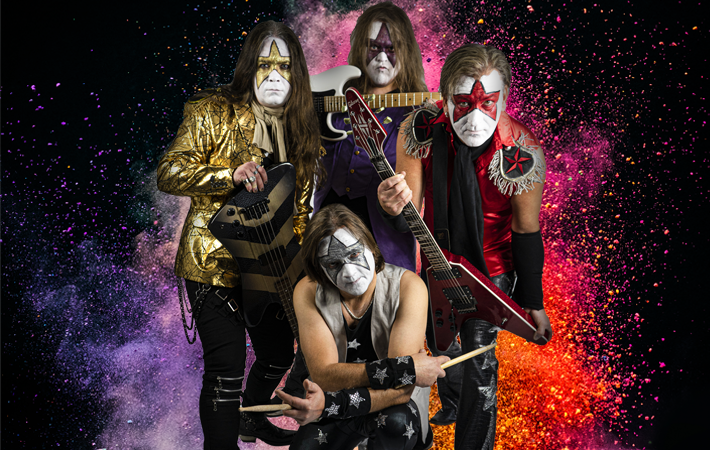 Starmen was formed in 2018 and was from the beginning just a fun idea, to make a record to all the heroes from the 70’s and 80’s classic rock-scene. Part of the tribute to the old rock icons was to create a grand gimmick around the band, were each member has their own color and wears a makeup-star on their face.

Debut albums Kiss the Sky and Welcome to my World released by Melodic Passion Records in 2020, and distributed by Sound Pollution Distribution, were both big surprises for many diehard rockfans, and the rockmedia was taken by storm. Both albums received brilliant reviews, which of course inspired them to create more music.

Here are just a few fantastic reviews from all over the world:

”The world that STARMEN create is an incredible world of good taste, harmonies, fantastic solos, rich ornaments and eared melodies”
Via Nocturna (Portugal)

”Just when I thought the Swedish har rock and melodic rock/metal scene had started to show signs of stagnation, out of the blue came these unknown STARMEN”
Glory Daze Music (Aus)

”STARMEN gives us old school melodic hard rock/glam rock. And it is pure poison, it is also not possible to shake this off. Once the album has kicked off with ”Dreaming”. It is a bit like a slap in the face”
Rockfarbror (Swe)

Starmen make original music with a great passion. After the two first albums, the band has cemented their position in the rock world and has found their own musical DNA.

The third album “By the Grace of Rock’n’Roll” was released February 26th in Japan, and March 12th in the rest of the world.

”One of the best albums released in 2021”
Arte Metal, Brazil

”A desire to forget the idea that less is more, and instead to be the biggest sounding record there’s ever been.”
Maximum Level Music, UK

”’By the Grace of Rock’n’Roll’ we have a record that hits the Stars.”
Therapy Through A Lense, UK

”An interesting album, with many faces to show..STARMEN..TO SUGGEST!!”
hardrockheavymetal, Italy

“For those who like nostalgia and good hard rock, ‘By The Grace Of Rock ‘n Roll’ is a feast”
Roadie Crew, Brazil

”Indeed, Starmen has taken another big step forward with the latest release. By the grace of Rock’n’roll!”
Rocknytt, Sweden

“The album is pure listening pleasure and the best musical entertainment”
Keep on Rockin’, Germany

”Forget the Kiss-esque image and all of the comparisons; give this rewarding album listen and then decide.”
RAMzine, UK

”For everyone who likes to listen to hard rock”
Rock Garage, Germany

“It rolls, it rocks, it grooves in a fresh, carefree way and makes you think back to the good old days when Rubik’s Cube was the toughest challenge in life.”
“If you are into well-made hard rock à la Whitesnake and Kiss, you should definitely check this out!”
Metal Inside, Switzerland

”Their own material is also convincing and the various singers in this troupe also deliver a vocal performance that the role models can hardly manage these days”
Crossfire Metal, Germany

”‘By the Grace of Rock’n’Roll’ brings color into life and helps the sweep the gray winter memories”
Markus’ Heavy Music Blog, The Netherlands

”The album title “By The Grace Of Rock N Roll” says it all. Almost three quarters of an hour of the finest melodic rock. And sometimes you even think you hear the protagonists of the 70s / 80s yourself. Individual riffs and hooks are built in so faithfully. Here are four excellent musicians at work who obviously absorbed the sound of that time with their mother’s milk. The album is pure listening pleasure and the best musical entertainment.”
Rock Castle Franken, Germany

”Get your feet off the floor, rockers!”
Arrow Lords of Metal, The Netherlands

”An album that has it. From a band that you’d like to hear live after you’ve listened to the songs. Keep it up. Many oldschool-fans will thank you.”
Stormbringer, Austria

“A good healthy slab of 70’s and 80’s influenced Hard Rock”
“Well produced and crafted, this is 20th Century Retro Rock at its finest.
Musipedia of Metal, UK

”By The Grace Of Rock n’Roll contains some of the best Kiss music never written by Gene and Paul, and the performances of all four band members are a joy to behold.”
“In fact the goosebumps on my body work overtime as soon as I put By The Grace of Rock n’Roll into my portable device and press play.”
Sentinel Daily, Australia

”From the opening bars of ‘Shining Star’ your on familiar Starmen Territory, with that unmistakable Scandi Rock sound and excellent production, giving you a larger than life soundscape. This is another superb release from the Starmen.”
Rockposer Dot Com, UK

”If you want to listen to something really good that can go on and on without you even thinking about it, this is the album to buy. It can go round and round without reacting because something new emerges with each listen that makes it anything but boring in the long run. A gold album!”
The Maloik Rock Blog, Sweden

”Starmen did a marvelous job here and the songs are pretty good”
Metal Addicts, Bosnia and Herzegovina

”They have once again created a masterpiece”
Hard Rock Info, Sweden

”The album is unpredictable and surprises you when you listen to it, every time you give it a spin you might discover something new.” “It’s already in my top list for 2021!”
RockPages.gr, Greece

“It is a nicely conceived concept and will undoubtedly delight the fans”
RockPortaal.nl, The Netherlands

”While the first two albums made the music world sit up and take notice the new album will cement the band’s reputation as the new pioneers of melodic hard rock.”
Wexford People, Ireland

”The main takeaway that can’t be denied is the stunning similarity between Kristian (Red Starman) and Paul Stanley of Kiss and I’ll go on record as saying that in my mind it isn’t outside the realm of possibility that if and when Kiss do reach the ‘End of the road’ and decide that the name and image will continue that they might want to keep him in mind. But if that doesn’t happen, then I hope that we have much more to hear from The Starmen.”
Blast Magazine, USA

”They have produced a brilliant album with some incredible musicianship and four very powerful vocalists.”
Jace Media, UK 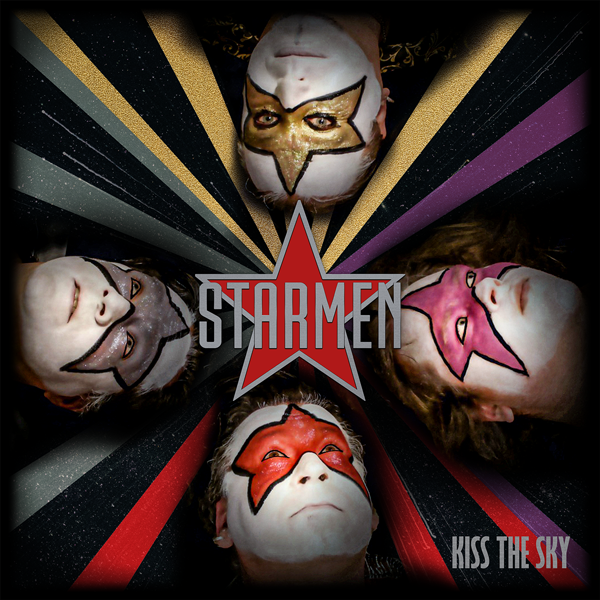 ”The band has kept this passion and taste for classic hardrock from bands like these and in addition developed their own, fresh 2020-sound.”
Glory Daze Music, Australia

”To be completely honest, this album is in the top 3 this year already, and then I have only listened to it for half a day.”
The Maloik Rock Blog, Sweden

”Musically the band is more than convincing and shows a more unique sound.”
Arrow Lords of Metal, The Netherlands

”An absolute recommendation for all hard rockers but of course also for all Kiss fans.”
Rock Castle Franken, Germany 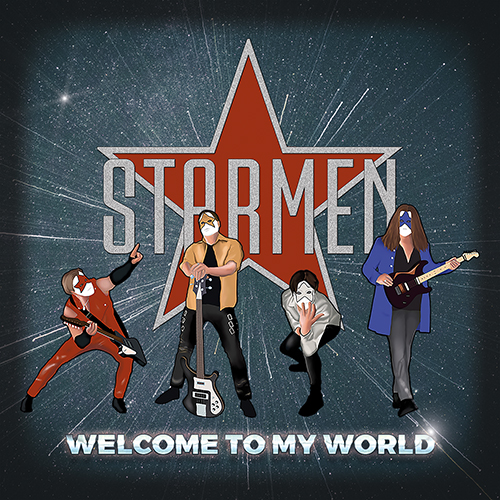 ”The world that STARMEN create is an incredible world of good taste, harmonies, fantastic solos, rich ornaments and eared melodies”
Via Nocturna, Portugal

”Just when I thought the Swedish har rock and melodic rock/metal scene had started to show signs of stagnation, out of the blue came these unknown STARMEN”
Glory Daze Music, Australia

”STARMEN gives us old school melodic hard rock/glam rock. And it is pure poison, it is also not possible to shake this off. Once the album has kicked off with ”Dreaming”. It is a bit like a slap in the face”
Rockfarbror, Sweden

”Welcome to My World is really a very good album, and STARMEN shows that there is space for them in the scene, so let the good times roll once more.”
Metal Temple

English
PRESS RELEASE: ”READY TO GIVE ME YOUR LOVE” – 2ND SINGLE
AND VIDEO FROM THE COMING ALBUM “WELCOME TO MY WORLD”
Uppsala, Sweden. December 13, 2019 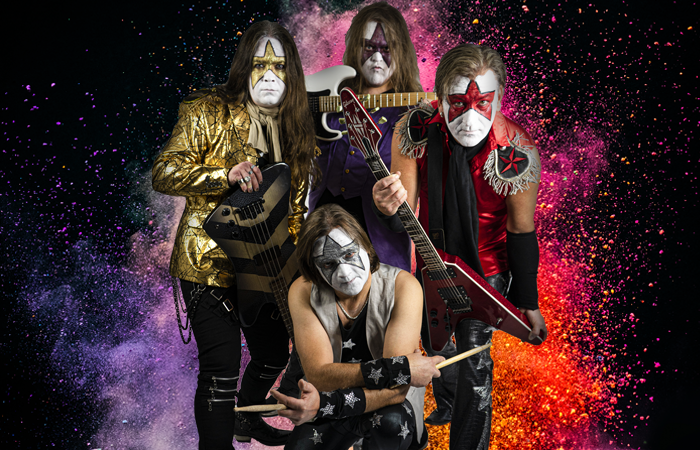