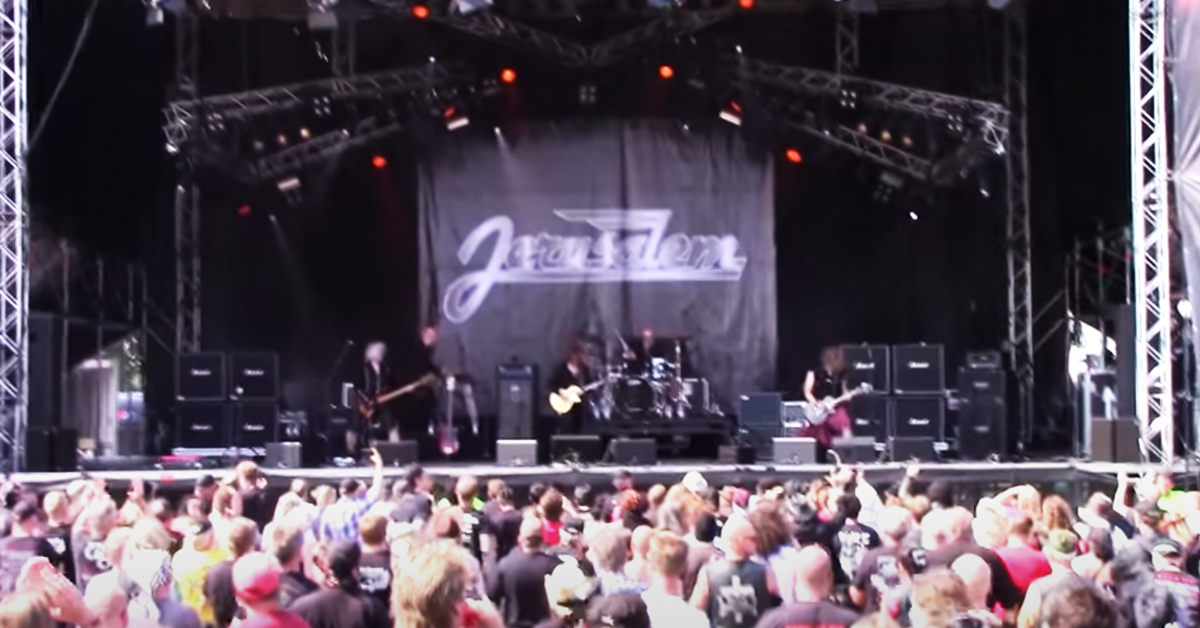 It all began in 1975 with a fifteen year old transit bus, bought from a surplus stock at the Swedish Telecom. It was a miracle that they even got out of Gothenburg. The water leaked out of the bus very quickly. Sometimes on tours they had to stop in the middle of nowhere and the guys had to wade in swamps to get water for the bus. But that didn’t keep the enthusiasm away. Every second weekend they took all the equipment and went on tour. The mission was to tell young people about God. In clubs, discos, schools.

They had to face a heavy resistance doing this.

Playing hard rock and being a Christian was very controversial at the time. Hard rock was connected to drugs, aggression and Satanism. Furthermore the music was ear-splitting. Being the first Christian hard rock band in Europe, Jerusalem had to endure a lot of criticism. They weren’t welcome at all to some churches. Smoke-bombs, long hair and luxury equipment was more than some people could accept, even if Jerusalem radically proclaimed Jesus. Hard rock was considered devilish.

Read more...
Jerusalem addressed the youth. Hard rock was a way of bringing faith in Jesus to them in their own language. The lyrics described their relation to God in an ordinary, but radical way. Ulf Christiansson wrote as much as he could, and at almost every concert he had a new song to present. Heavy music delivered a heavy message and between the songs Ulf preached. In that way the concerts were more than just concerts, they turned into revival meetings. Side by side, hard rockers and confirmands were rocking. But also old people who were touched by God in a new way.

“One night, an old lady came to us after a concert and wanted to beg our forgiveness. She said that she had turned terribly mad when we started playing. She wanted to grab her purse and leave. But then she saw Jesus walking from the stage down towards her. He sat down in front of her, turned around and said: Those are my guys. Tears were streaming down her eyes when she told us.” 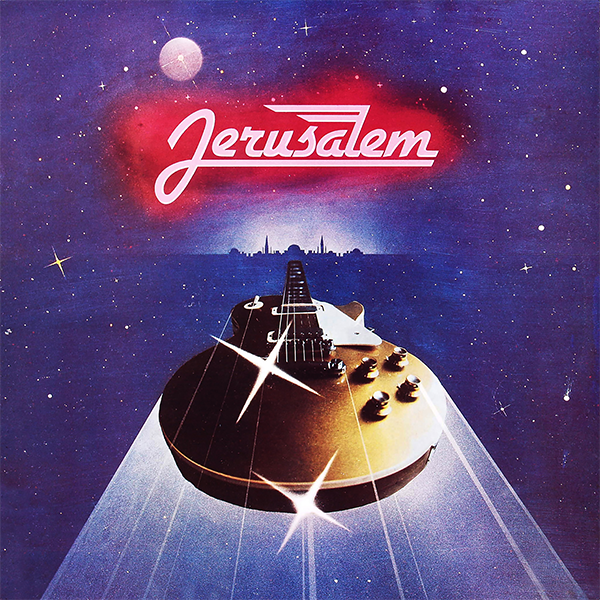 As time went by, prejudice seemed to disappear. The band was conductive to that by not giving up. After three years of touring record companies began calling. “I had told God and the guys that we won’t knock on anyone’s door, but wait for a record company to call.” The Christian record company Prim did, but they didn’t believe in too much success. They were wrong. The record Jerusalem (Volume 1) became an instant hit among the audience. In just a few months the record sold 30 000 copies and kept on. Jerusalem reached far outside the church walls, drawing both believers and non-believers. 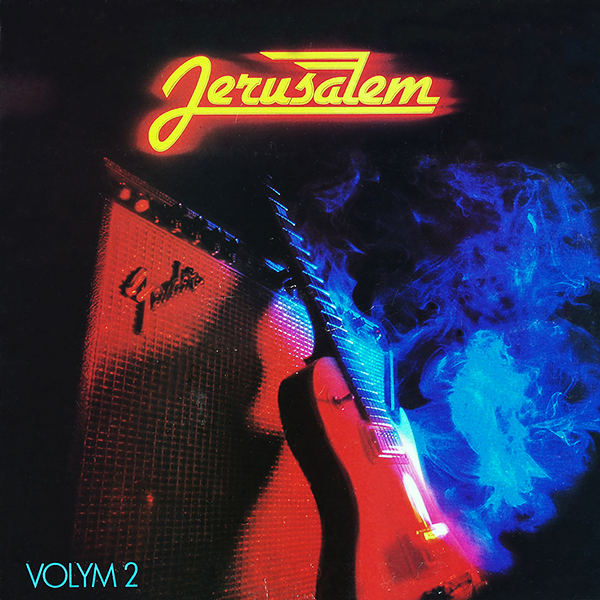 Jerusalem continued growing as a band. They toured both in Sweden and the rest of Scandinavia. And Ulf Christiansson continued writing songs. Ulf’s lyrics was captivating, demanding and brought many people into a real relationship with Jesus. The next album was released already in 1980 and was named Volume 2. This record, which was made both as an English and Swedish version, opened the doors to the surrounding world. All of a sudden their working schedule was filled with tours in Germany, France, England, Belgium and Scandinavia. They decided to leave their jobs and go fulltime. From the Christian Greenbelt Festival in England, where Jerusalem participated during the summer, Americans brought the record to USA and Glenn Kaiser, leader of one of the largest rock bands there. He gave the record to Pat Boone, who owned the record company Lamb and Lion. They released the records in the USA. 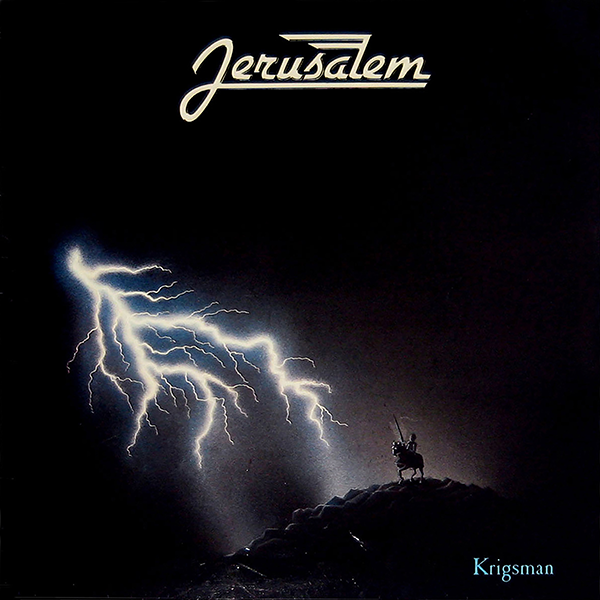 As time went by and Jerusalem joined forces they released the record Warrior. “Third time lucky!” the newspapers wrote. Warrior became a sales success in Sweden, Europe, USA and Canada. As a result of this music videos were recorded of the songs Constantly Changing and It’s Mad. Both songs made it the following year to American MTV.

The nights in narrow tour buses were gone. In the fall of 1981, Jerusalem took the plane to USA and went on tour. It became a success. European, radical Jerusalem, with their heavy hard rock took USA by storm. At this time the band consisted of Ulf Christiansson on guitar and vocals, Dan Tibell keyboards, Peter Carlsohn, (replacing Anders Mossberg on bass) and finally Michael Ulvsgärd on drums (replacing Klas Anderhell). 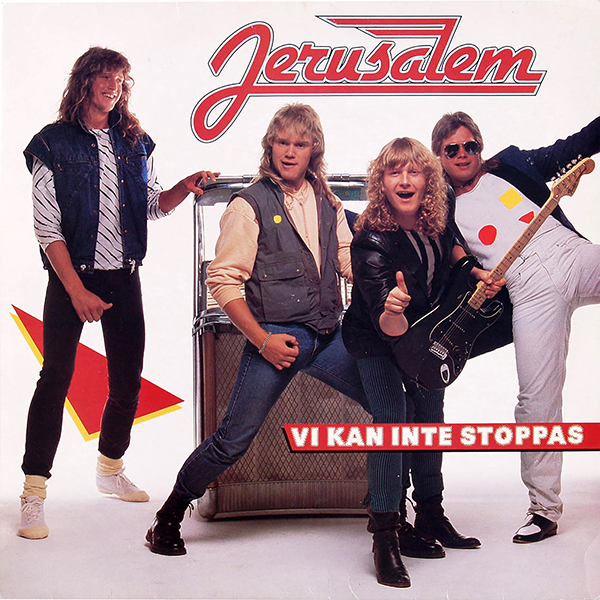 The thought of reaching even higher was thrilling. The success made way for commercial thoughts. But the world of Christian music had changed, sales numbers became more important than preaching the Gospel. With the fourth album: Can’t Stop Us Now, a new era started. Not only the music changed and became more melodic, but the lyrics didn’t speak as radically about God as before. The album, recorded in Ireland, lead to another tour in USA including Canada and Puerto Rico. 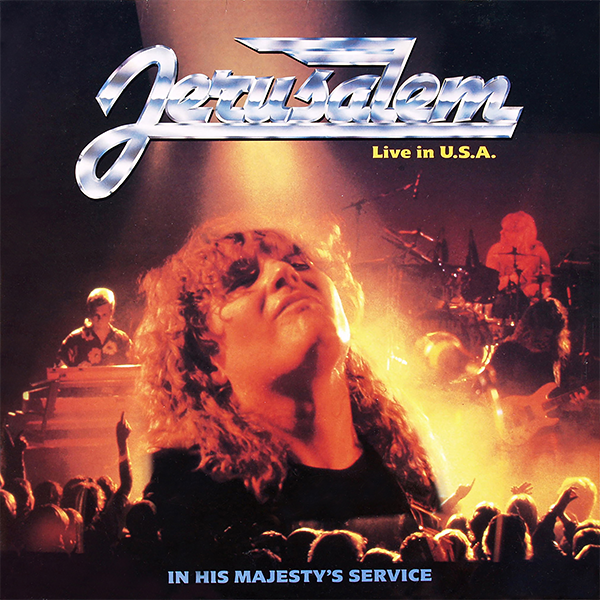 The success was enormous. During the following years, Jerusalem mostly toured abroad, with their huge equipment that weighed five tons. That was more than any other Swedish hard rock band could show at the time. Between 1983 and 1985 Jerusalem made several very successful tours in USA, which finally resulted in a live album: In His Majesty’s Service, recorded in Shreveport and Dallas. Showing Jerusalem’s radical presence on stage with Ulf shouting a heart piercing “Wake up Mr. Christian!”.

Eventually it all became too much. Jerusalem pulled the emergency brake. The glamorous life had become too much. Family life was suffering. The band was tired and in some way the commitment they once had was gone. In the fall of 1985, Jerusalem took a break from touring. A new journey began, where the music had to stand back. Jesus was once again put first. And focus on the mission started to grow back, to find the “first love”. 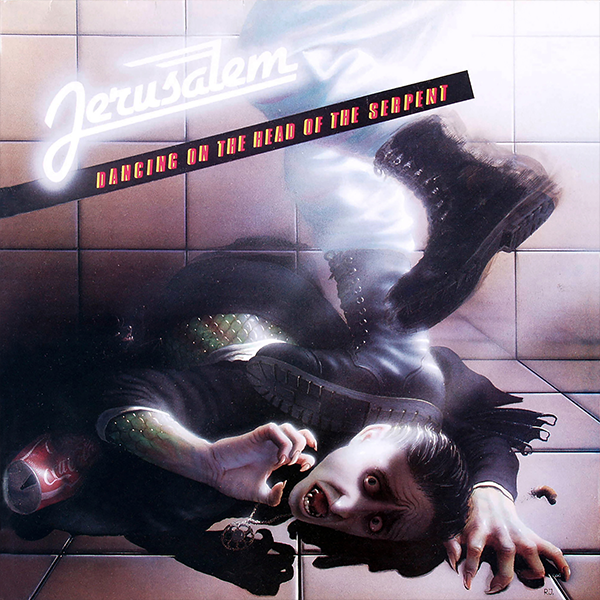 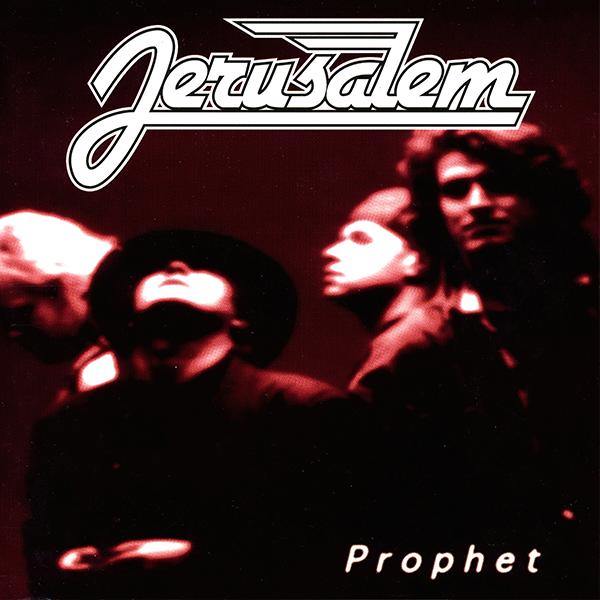 Then as a reaction to the growing Satanism in Europe of the 80′s they made the record Dancing on the Head of the Serpent in 1987. Reidar I Paulsen played the keyboards. On the sleeve there was an army boot, trampling on a demon. This shocked the Swedish Christianity. The record stores sold the record under the counter. But the record made #1 on the American radio charts with a following Dove Award nominee. After this the band was quiet for a while. Ulf did some solo albums instead. But the vision and the dream was still alive. In 1992, the band moved back to Gothenburg and recorded the Prophet album. It became the album to get the most favorable reviews following a European tour. 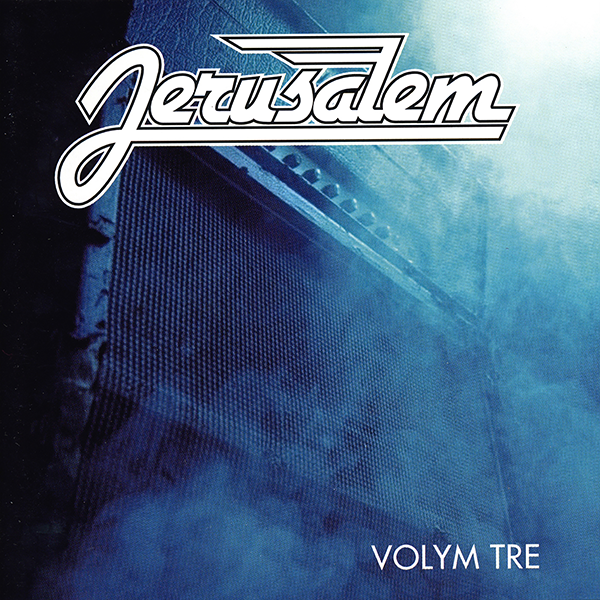 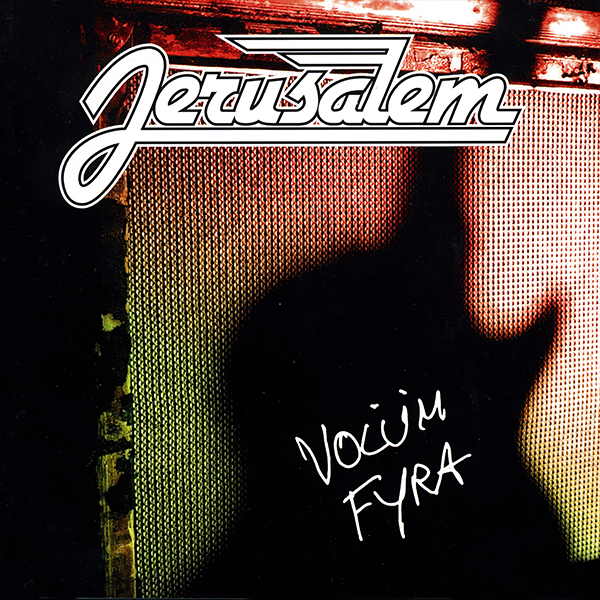 After this Jerusalem has made several albums. 1997 they released Those Were The Days (Volume 3) and the year after that R.A.D. (Volume 4), both as a longing to capture all the songs Ulf wrote during the vinyl days. “It was impossible to record all songs we wrote during that time, a vinyl record could only hold 22 minutes on each side and we had far more songs than that, that’s why we did Volume 3 and 4″. 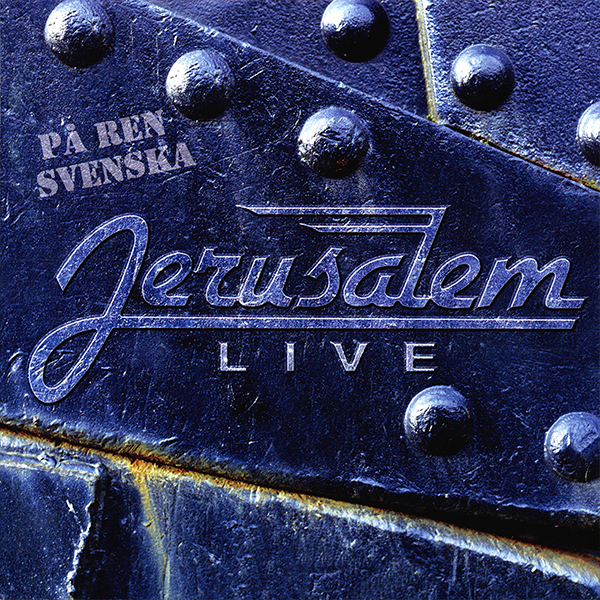 The following year Jerusalem did a tour in Scandinavia including the Baltic States called På ren svenska (In pure Swedish) where they did most of the songs in Swedish. During the tour they also made a live recording in Sweden and Norway, Live – På ren svenska. The record captivated in a great way the bands presence and radical voice.

In 2001 Ulf decided to move to America and record his solo album: Entertainers & Soldiers. He stayed in Florida for 3 years with his family. During this time Jerusalem only did some festivals in Europe and in Sweden. In 2006 Jerusalem did a very successful anniversary tour in Sweden called Tretti (Thirty) where they played 3 sold out halls in Sweden. The tour was done in 2 sets on stage. One from the earlier years and one from the latter years. A video was made from the tour including the history of 30 years of the impact and groundbreaking pioneer work of Jerusalem. 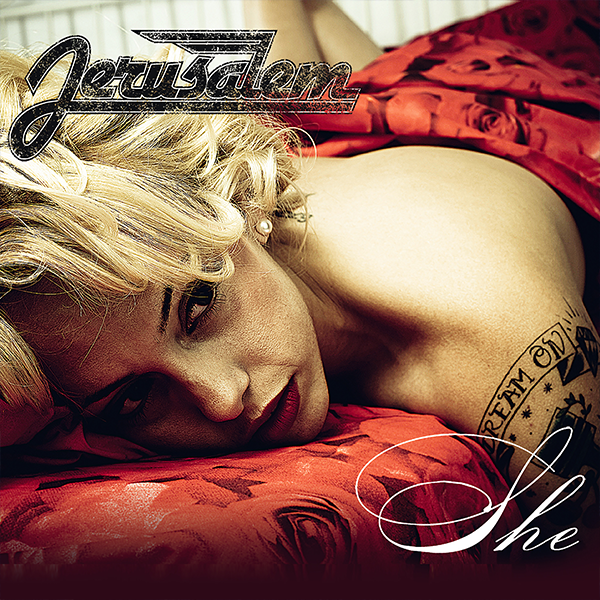 2009 Jerusalem decided to go into the studio as a 3-piece setup with Ulf Christiansson, Michael Ulvsgärd and Peter Carlsohn. They recorded the album She as a reaction to the growing lukewarm condition of the church in the west. With She Jerusalem instantly made #1 on Scandinavia’s Ginza (Scandinavian Internet sale list). In a review by Sweden Rock Magazine (Scandinavia’s largest rock magazine) Ulf was granted the title as having one of the best rock voices in the Rock’n’roll world.

CJ Grimmark (Narnia) joined Jerusalem in 2011 mainly as keyboardist but also as guitarist, and Ulf’s son Philip Christiansson joined the band as guitarist and singer. In 2014-2015 Jerusalem made the Father2Son Tour in Scandinavia where Peter Carlsohn was replaced by longtime bass-player Anders Mossberg and Mick Nordström replaced Michael Ulvsgärd. The band also performed at Sweden Rock Festival in 2015.

In 2018, the process of writing another Jerusalem-album began, and the recording sessions started in 2019 and continued in 2020. The new album (still untitled) will be released in Swedish first, and later in English, and band members from the past lineups will participate.

Jerusalem is by many considered to be a “Prophetic voice” for this time. Jerusalem will keep on calling us to turn back. Jerusalem is and will always be more than just a “rock band”. 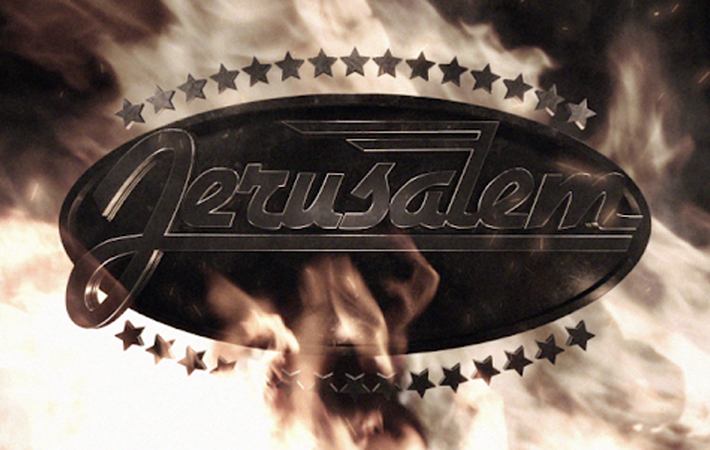 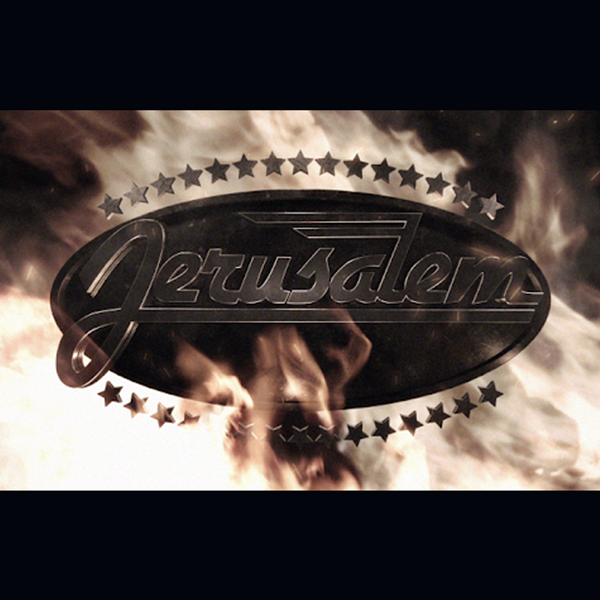 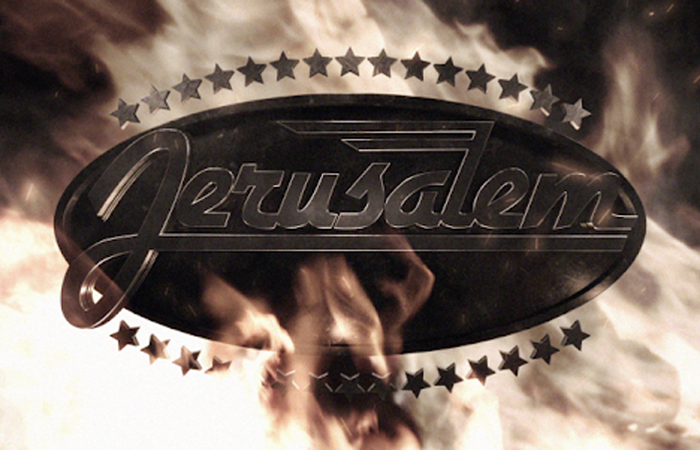