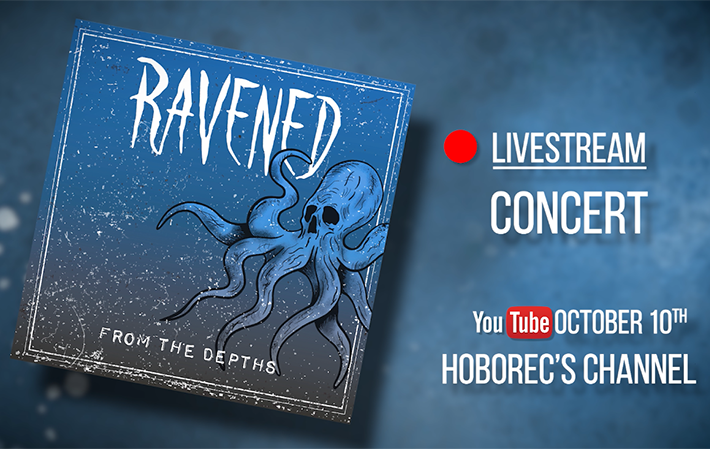 Ravened, a young modern metal band from Sweden, with family connections to bands like Hellfueled, Narnia, The Waymaker and Audiovision, released its debut album From the Depths August 7th. The album has received many great reviews from both Europe and the US, and was released via the label JONO with distribution of Sound Pollution. Now the band follows up with a live-streamed concert on HoboRec’s YouTube channel October 10th 7pm CEST.

Ravened from Jönköping, Sweden, started in 2018 and plays modern metal merged with influences from the past from bands like Pantera, Bloodbath, Lamb of God, and Metallica.
The members are between 19-24 years old, but the music has been a big part of their lives for generations. Olle Liljegren (guitars, songwriter) is son to Simeon Liljegren (Modest Attraction, Audiovision), and nephew to Christian Liljegren (Narnia, The Waymaker, Audiovision, Divinefire, Golden Resurrection, etc.) and drummer Oliwer Svensson is son to Kent Svensson (Hellfueled).
On Saturday, October 10th, the band and The End Studios invite you to a live-streamed concert via HoboRec‘s YouTube channel. Attila Bagi and Michael Bengtsson, who have made the band’s first two music videos (From the Depths and Foul Deeds) are filming the concert. Ravened promise songs from the debut-album, and a lot of energy.
From the Depths is recorded in Lund, produced by Ulf Blomberg (HoboRec) and released on CD and digitally August 7th by JONO, with distributed by Sound Pollution.